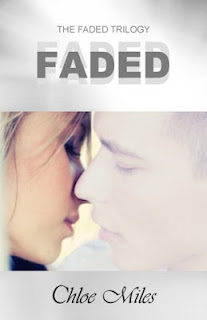 Savannah's life gets turned around when she and three friends die in a car accident and find out that they're going to get another shot at life in exchange for helping a group of four teenage spirits.  Savannah and her friends are the new Chosen Ones, and they're going to work with the spirits against the Forces, another group of spirits - but these ones are rogue and determined to wreak havoc.  They're also looking for a new recruit: their eyes are on Savannah and they'll stop at nothing to get what they want.

What promised to be an engaging read unfortunately turned out to be something of a letdown.  What first struck me was that the narration was overly basic, making the story sound simplistic and general rather than honing in on the detail.  In fact it reminded me of the way fairytales are written or told for little children.  It didn't feel like I was watching a story unfold in front of me.  I didn't get to see things or find them out for myself; rather I was told everything, making it all seem flat.

Neither did I bond with the characters.  I didn't see any character depth, nothing that made me feel much towards them.  All the characters (except the Forces, of course) were nice.  They all have really good hearts, which is fine, but - there was no complexity.  I find that people generally comprise of several layers, but these characters were made up of one or two at most.  In addition to that, Miles seemed to want all of these characters to get along.  So for instance, Abigail, Savannah's best friend, doesn't like Madison, but they soon become fast friends.  Heidi, Miss Mean But Popular Cheerleader, realises the error of her ways after Madison helped her - for the second time - out of a dangerous situation.  It was too feel-good, too cheesy.  Plus there was the huge issue of Savannah, Madison, Abigail and Jackson accepting their situation so quickly.  The Forces themselves were not particularly impressive for an apparently evil group of spirits.

Likewise the romance wasn't realistic.  Faded is guilty of the dreaded insta-love and as soon as that happened, my tolerance for this book dropped even lower.  Sure, Hunter and Savannah are nice people/spirits, but I didn't really see why they loved each other.  What was it that made them special to each other?  I did, however, appreciate the easy conversation between them and the humour they provided.  Their's was a light, easygoing romance.  There was one stumble, but that was soon overcome and it continued on as before.

This book does warrant some credit.  The ideas behind it are good and it's a light read, ideal if you're looking for something like that.   But...it was too simplistic.  There was no development, no substance, no realism.  I desperately wanted to engage with the characters and the events, and found that I just couldn't.  Unfortunately this was one of those books that left me extremely unsatisfied.
Posted by Aa'Ishah at 17:44