Hey guys!  Today I'm so happy to be part of the tour for Strength by Carrie Butler.  You can find the rest of the tour stops here.  Don't forget to enter the giveaway! 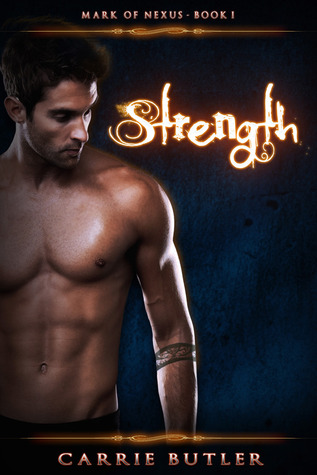 Usually when I read a book, I re-read the synopsis first, because by the time I've finally managed to get hold of it, I've forgotten what it's about.  If I don't read it, I find that before I can get too far in, I feel like I have to read it.  With Strength, however, I felt no such compulsion and as such, I had no idea what to expect going in, bar the fact that this was paranormal.  What I got, then, was a unique add to the paranormal genre, a healthy smearing of sizzling romance and a snarky protag who you can't help but love.

The rumour on campus is that Wallace Blake is not a sane person.  Stories circulate about what happened to his old roommate, and weird noises can be heard from his room in the evenings.  As such, everyone stays well away from him.  That is, until Rena Collins unwittingly crashes into him on her way to see a friend.  That encounter, accompanied by a couple others, leaves her intrigued.  He seems perfectly normal - and yet, there's something different about him.  Not his sanity.  But there are questions, such as how he leaves her with bruises after only minimal physical contact.  Soon she learns that he isn't human and now, somehow, she's landed herself in a situation that is soon going to spill into war.  She's being watched, and the only way for her and Wallace to make it out alive is by fighting.

I've been feeling, for want of a better word, somewhat dead lately, simply because things have been really hectic and intense for me.  But for the time I was reading Strength, I felt so much more awake.  With the very first page, Carrie Butler had me sitting up alert and reading keenly.  The scene you find yourself in upon opening the book is not a typical one.  In fact, there is little to be found here that is typical.  The paranormal element is certainly a different one.  I appreciated this, enjoying the revelation of Wallace's true identity and then finding out more about his family and the magic of his bloodline.  In reading Strength I found myself laughing frequently, annoyed every time I was forced to put it down.

This is in large part due to Rena.  Tough, sarcastic, funny, hers is a voice that will not fade quickly.  It's one that really does call out to you from the start.  Rena is not your average heroine.  She's not afraid to fight and doesn't simply end up paralysed every time she gets stuck in a difficult situation; nor does she give up.  Her sarcasm and wit make her all the more likeable, not to mention the fact that she ends up being funny without meaning to.  Added to all of this is her genuine concern for the people around her.  Wallace, too, is not simply a cardboard character.  A good guy surrounded by people who misunderstand him entirely, he suffers a lot of pain, both physical and emotional.  I was glad to see him finally have the chance to open up more and to really be supported by Rena.  He, in turn, supported her whenever she was feeling vulnerable.  Their relationship is a slow one, plagued by doubts and insecurities, but finally working its way to a positive end for both of them.

That's not to say this book didn't have flaws.  Because it definitely did.  There were character and plot issues that I found myself unhappy with, where certain things were overlooked or caused me confusion.  Early on there was also an element brought in that did have me concerned about where the story was heading, and I was thankful when it didn't go that way.  Yet at the same time, it made me wonder what its purpose was, because that particular line was never brought back.  Nor did I like Rena's friends, Gabby and Aiden.  Both irritated me for various reasons.

All in all, however, there is no denying that I thoroughly enjoyed reading Strength.  Despite my concerns, this is still something different, and I loved reading from Rena's perspective.  It was great as well to have a love interest who, while strong, dark and fierce, is not a bad boy.  I will certainly be keeping an eye out from now on to see what more Carrie Butler has to offer.