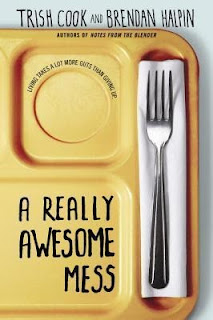 On the surface, A Really Awesome Mess doesn't look like it has much to boast about.  And despite my love of contemporaries, it's not necessarily something that I would usually go for.  But there was a small part of me that was curious and, as often happens when it comes to me and books, that small spark of curiosity was enough to prompt me to read this.  Now I can say that I have absolutely no regrets, because this proved to cover a multitude of issues, present interesting character relationships and be completely hilarious all at once.

Welcome to Heartland Academy, a reform school in the middle of nowhere meant to deal with a whole range of mental health, emotional and other issues, from anger management to eating disorders to compulsive lying to addictions to suicidal tendencies and more.  In Heartland Academy we meet six key people - Emmy and Justin are the two protagonists, yet alongside them are four friends, and it is through all of these characters that Cook and Halpin explore such issues.  These were managed nicely so that they interwove together; while all these problems weren't explored in detail - indeed, there were too many of them for that to happen - it was still enough for me to appreciate them and what the characters were going through.  There were also layers created, particularly in Emmy's case: just when I thought I knew about her life and why she felt the way she did, I learned something else about her.

I thought the authors had also done a remarkable job with the characters in bringing them alive and making me connect with them all.  Admittedly I was annoyed at certain times, but the more I read the less this was so.  For me, the last third or so of the book was the strongest, at least in terms of character relationships.  I loved watching them all work together, encouraging each other to work past their issues and really come to be friends.  The plotline this took place around was undeniably ridiculous - several times I stopped to reflect on what exactly was happening and why these characters were working together - but it was so funny and actually not at all bothersome, that I just accepted it and read on.  I had this near-constant grin on my face, and I was content to just be along for the ride, however unlikely it was.

A Really Awesome Mess turned out to be a quick, almost surprisingly enjoyable read.  I usually like my books dark and emotional, yet this somehow turned out to be a mix of emotional and quite funny, one that was strangely compelling in this case.  I'm definitely glad I decided to give this one a go.
Posted by Aa'Ishah at 05:00