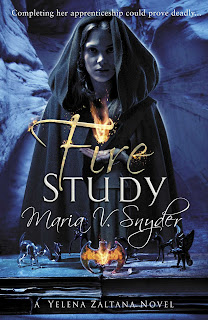 After being a little disappointed with Magic Study, I hoped that this one would finish the series the same way it started it: brilliantly.  Unfortunately, it didn't quite manage to do that.  Fire Study and I got off to a little bit of a rocky start and there were hiccups along the way.  Having said that, this book was still pretty good.

Fire Study picks up where Magic Study left off.  Soulstealer Ferde has escaped and First Magician Roze is looking for any opportunity to have Yelena executed.  Yelena must find a way to recover Ferde and keep the two nations from becoming embroiled in war, all the while ensuring that she herself does not end up in prison.

I had a few issues with this book, most of which had seeped through from the second one.  Actually, they didn't just seep through; they had a very thick presence.  One of these was the transition of events.  Things would suddenly happen, or Yelena would be suddenly be in a different place, or Valek would suddenly appear, with no details to smooth it over.  Because of that, Synder skipped over key information which I felt should have been focused on more compared to other, minor details.  We also lost Yelena's emotional responses in the process, which detached me slightly from her character.  It made for quite a disjointed book.

Something that really frustrated me was Valek and Synder's portrayal of him.  In Poison Study he was an amazing character, with so many different facets that I was forced to surrender a piece of my heart to him.  He played a significant role within the book and the relationship between him and Yelena was present and flourishing.  But in Fire Study his presence was sudden and minimal, and we only saw one side of his character.  Don't get me wrong, I love the way he's so willing to help Yelena and just generally be there for her.  But I missed seeing the other sides to him.  And anything that Yelena couldn't solve, he became the solution, a way to help her solve the situation.  It was all very convenient.

Another convenience was Yelena's magic.  This was an aspect of her I found a little irksome.  I realised way before she did that she relied on it far too much, and was consequently neglecting all the other skills that we saw in the first book, all of which made her a great heroine.  This was something I found difficult to come to terms with.  I loved who she was in Ixia - independent, resourceful, strong yet vulnerable.  In Sitia she transformed into being dependent and someone who took too long to accept her responsibilities.  While I felt sorry for her because of all the expectations people had of her, I felt she took too long pushing people away and refusing to act on the reality that those same people were looking to her for action and a continuation of the strength and courage she had so far possessed.

However, it wasn't all bad.  There were some brilliantly-crafted action moments, and the ending was beyond satisfactory.  Every time I thought this book was an OK read and nothing more, she surprised me with something fast-paced, energetic and engaging to read.  Because of that, she managed to conclude this series very well.  By the end of it she almost had me squealing with delight and reawakened my love for Valek.  I also loved seeing Ari and Janco again.  These two hadn't changed a bit from the first one, and had me smiling and laughing along with them.

On the whole, this was a good book, though sadly not of the high standard that this series started out with.  Information that I thought would have been good, if not important, to include was skimmed or skipped over.  We don't get fully reacquainted with Valek when he suddenly appears, nor do we see Yelena's reaction on seeing him for the first time in ages.  The book was somewhat disjointed and the protagonist's character not quite what it had been originally, as with Valek.  Yet for all that, the book was interspersed engaging sections that heightened my appreciation for it.  Plus, the ending more than made up for the bad parts.  Overall, it's definitely worth the read; I just wish that Snyder's ability to craft something engaging at the very least was constant.
Posted by Aa'Ishah at 23:02